Two young women are practicing Yoga in a fitness centre.

for his age       для своего возраста

to do aerobics        заниматься аэробикой

to use the exercise bike        заниматься на велотренажёре

I am going to talk about appearance. I think the best way to do that is to describe some people I know. Let me start by talking about my mother and my younger sister. You can see them in this picture…

Kate and Mum are having a tense discussion about money.

My younger sister’s name is Kate. She is nine. She is 140 centimetres tall and quite slim . She has long straight blond hair which she usually pins down at the back of her head with a few bright hairpins. Kate has a pretty face and beautiful large light-brown eyes with thick eyebrows and long eyelashes. She is wearing a white hoody with large flower prints. She also has her favourite blue jeans on. You can’t see it but she is also wearing her favourite pink trainers. In this picture, she is sitting on a couch with her hands under her seat and is obviously feeling uncomfortable. This is because the mother is asking her how she had spent her school lunch money. Kate obviously did not buy her lunch that day. My mother is 32. She is of average height . I am not sure how tall she is exactly. (She is slim and fit. She goes to the gym every week.) She has long straight auburn brown hair which she pins down at the back of her head with a comb. She looks younger than her age. Mother has a beautiful face and light-brown eyes. Everyone says that Kate has her mother’s eyes. She is wearing earrings. She is a lawyer and has to dress smartly. That’s why she is wearing some makeup. She is wearing her favourite grey dress in this picture which suits her very well. She is looking at Kate and expecting an answer about Kate’s lunch money. But I don’t think she is going to get it. Kate is never going to tell her that she had spent the money to buy some weapons in the Encounter Strike game. Ha-ha.

Now I am going to show you a picture of my grandfather and father. Here they are…

My granddad and my father are hunting.

You may not believe me, but it is them. My father and grandfather love hunting. My grandfather is 72. He is of average height . He is well-built but not overweight. He hardly has any belly. He is slightly bold. His hair is all white. He wears his hair short and it is quite straight. He always wears a beard and a large moustache. His moustache is slightly curly . That is my grandfather likes to curl the ends of his moustache himself when he has nothing better to do. His eyes are light-grey. In this photograph, he is wearing his checked woollen hunting jacket, a woolen flat cap and a bow tie. (I’ll never understand why he needs his bow-tie during his hunts, but my grandfather respects proper clothes.) He is also wearing a waistcoat under his jacket, grey trousers and leather boots. My father is 35. He is only slightly taller than my grandfather. He is slim and very fit. That’s because he goes to the gym with my mother. His hair is brown short and straight and carefully combed. He also has a short beard and a bit of a moustache like my grandfather. But his beard and moustache are very short. He can’t wear a longer beard because he works in an office and long beards are not acceptable there. His hunting jacket is light grey with brown suede inserts on the shoulders . He is wearing a waistcoat under his jacket, a khaki-coloured shirt and a cravat. His trousers are dark brown and, though you can’t see it in this picture he is also wearing a pair Dr Martens shoes which he likes.

But I haven’t talked about winter clothes. So, now I am going to show you a picture of my crazy Uncle Somerset. Just how crazy my uncle is you will understand as soon as you look at his picture…

Yup. This is Uncle Somerset. He is 45. He is tall. I think he is 187 centimetres tall. And he is not slim he is really thin and pale-looking. He never goes to the gym and since he lives alone he doesn’t have anyone to prepare nice dinners for him. Maybe that’s why he’s gone a little crazy. Look at him. He is sitting outside in winter while snow is falling in his light woollen coat. I know for a fact that he has a warm parka and a woollen scarf at home but he doesn’t like to wear them and so freezes occasionally. Anyway, he has a handsome thin face. He never wears a beard or a moustache. His hair is slightly wavy brown and short. He combs his hair every morning. He wears glasses because he is short-sighted. He is a teacher so he has to wear smart clothes most of the time. In this photograph, he is wearing a dark-blue suit a light-blue shirt and a red striped tie. Luckily for him, he has his winter boots on. If it hadn’t been for them he would have frozen while this picture was being taken. He looks tense and worried in this picture and very very cold, but actually my uncle Somerset is very kind and clever. 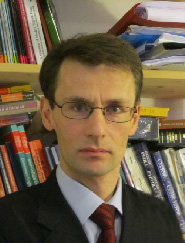